(Follow this link to see the May 2020 Priory Newsletter where this was originally published.) 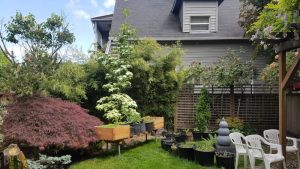 Our experiments with container gardening have been yielding some nice produce! (Plus, way over on the right side you can see our new mason bee house.)

When I was a novice of maybe two years, there was a time when one of the senior monks was having a very difficult time and he was causing a great deal of turbulence and difficulty in the monastery. We were having a meeting of the community to discuss what was happening and I asked Rev. Master Jiyu to explain something that she said. She basically ignored my question and asked me if I could handle the Three Pure Precepts. I thought about it and said I didn’t know and she replied that when I did, we could talk about the question.

In retrospect, my asking her this question was a bit cheeky since, to a moderate degree, novices were to be seen and not heard at that time and I am grateful that she took the time to answer my question in a real way. I say a real way, because again, as I think about it, I was really just asking out of idle curiosity and not from a real place. Her response though, was from a real place and it has stuck with me. How do we “handle” the Three Pure Precepts?

Another thing she said at that meeting stuck with me as well. This second one was what might have seemed like a throw-away comment: she said, “I just keep having a sense of the unreality of this situation.” This was just a remark that she made which, at the time, didn’t lead to expansion or discussion but it somehow caught my attention. Later, when I mentioned it to one of my seniors, he said “oh, that is a very deep teaching.”

Our current shared circumstances with regard to the pandemic and other world turbulence remind me of that meeting and these two teachings she gave.

It is my understanding that, at the time of the Buddha in India (and perhaps it is still the case there), there was a common practice of leaving behind worldly life in order to become a religious seeker. It was thought that there was a deeper connection to the higher things of life to be found, and that the best way to find that connection was to set aside the pursuit of material well-being and seek that connection full-time. In this context, the Buddha renouncing his life as a prince was a culturally appropriate response to the deep sense of compassion arising within him for the suffering of those around him.

In looking at my own life of renunciation, I realize that there is also another dimension to the movement of the heart leading to the radical step of renouncing the world. This other dimension is a kind of weariness or disillusionment with the endless ups and downs of the world; ups and downs that seem to lead nowhere. It is like the disappointment of Dorothy looking behind the curtain only to find out that the Great And Powerful Oz is just a regular guy pulling the levers of a machine.

Sometimes this weariness is also talked about as a disenchantment. I like this word disenchantment since it implies the dropping of a spell which has distorted our view of things: we are no longer excited or taken in by the shiny promise of the advertising. This disenchantment was, to me, what Rev. Master Jiyu was pointing at: she was saying, in effect, “all this trouble and strife are not the real thing.” The enduring legacy of the Buddha is that he fearlessly faced that disenchantment and, with an intuition that there was something more to life, stepped beyond it. In accepting and stepping beyond that disenchantment by practicing meditation and spiritual discipline, he was able to prove for himself, and us, that that Greater Thing exists. In a very important way, Rev. Master Jiyu embodied that for me; she embodied both the sense of disenchantment with the world and the stepping beyond the disenchantment, through practice, to knowledge. Rev. Master Jiyu, it turns out, was also that rarest of beings, one who can teach others how to find that knowledge for themselves.

Many of us feel that weariness or disillusionment with the world, but if it is not fully recognized and if we do not see an alternative, it can just leave us cynical or with the desire to blur out that feeling in various ways. For many of us who practice Buddhism, we come to practice because of some variation on this disenchantment.

I have heard it said that one person renouncing the world is a critique of what other people are doing. Like, out of a sense of superiority, one person saying to another “I am going to renounce the world because your life isn’t worthy.” One of the things that this fails to recognize is that, for me at least, what I am renouncing is as much in me as it is in the world around me: I am attempting to renounce my own entanglement in greed, hatred and delusion, the Three Poisons. Acting on the Three Poisons is what produces the miasma of unreality.

So, this leads us to the second part of the story, the “how to handle the Three Pure Precepts.” It was important to me that Rev. Master Jiyu’s comment about the “unreality” was made in the midst of a meeting about the details of how to handle a difficult and turbulent time: a meeting about how to act in a careful, kind and wise way to help beings. In other words, she wasn’t trying to hide from or escape the situation of life. Similarly, for me, renouncing the world is neither a judgement about any particular life or way of life, nor is it a running away from life: it is, in part, an expression of a wish to discover what is really going on and how to deal with it in a true way. Renouncing the world, while it really is setting aside the usual pursuits of human life (family, career, personal expression, etc.), seems to actually be one way of entering into a closer relationship with our basic life. This dealing with it in a “true way,” this closer relationship, is where the Pure Precepts come into play.

As an aside, I should perhaps say that if a person were to attempt to renounce the world and become a Buddhist monk motivated by an impulse toward escapism, it is unlikely to work for very long, since escapism is just another form of greed and monastic life is designed to help us to discover just that sort of motivation and to let it go.

The Three Pure Precepts are “Cease from evil (or, cease from that which causes harm),” “Do only good,” and “Do good for others.” Handling the Three Pure Precepts, to me, has two parts. The first part is the training I do to recognize, in detail, the patterns of mind that lead me to create suffering: this is mostly meditation. The second part is the refraining from those patterns, to the best of my ability: the careful examination of one’s own behavior of body, speech, and mind.

Renouncing the world in the formal sense to become a monk can be a helpful step in that training to hear and follow that Greater Thing, but it is not the only way to do that training. Each time we set aside our preferences in order to hear and follow the precepts in our own heart, or we set aside what we would like to do (and this could well be the setting aside of that impulse to fix another person or situation) in order to help the being in front of us, we are participating in this renunciation of the world, the renunciation of selfishness.

In that long ago meeting, we, as a community, were trying our best to set aside our fear and annoyance and worry in order to, in a wise way, help the monk who was having a difficult time. And, we were trying our best to help the beings in the monastery who were affected by the trouble he was causing. We were, in effect, trying to recognize, accept and see through the miasma of unreality, with our training, and asking and answering the question: “what is good to do, beyond the opposites?”; “how can we handle the Three Pure Precepts in this very down-to-earth situation?”