(Follow this link to see the June 2020 Priory Newsletter where this was originally published.) 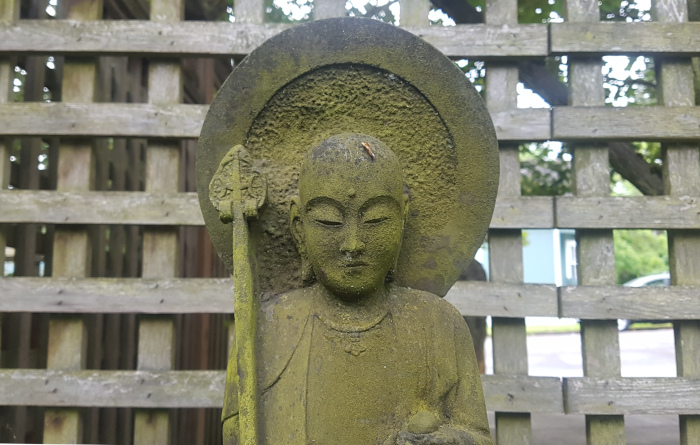 Our backyard Ksitigarbha Bodhisattva turns his gaze within.

Every now and then, Shasta Abbey will be the host for a yearly conference of western Buddhist monastics; at these conferences the community has the opportunity to spend time with monastics from other traditions. One year, when I lived at Shasta, that conference came around and I had the opportunity to serve food to a senior monastic in the Theravadin Buddhist tradition. (Theravada Buddhism is the form of Buddhism commonly practiced in southeast Asia and, while this monk was a westerner living and practicing mainly in Canada, his tradition came from Thailand.) At this one meal that I am remembering, since it is the practice of the monastics in this form of Buddhism to not serve food for themselves, I was asked to serve him and I was trying to be careful to give him what he might like. He seemed to get frustrated with my fussing, and said with a mild hint of exasperation,  “just as it comes, just as it comes.”

There is a lot that could be said about the virtues of taking life just as it comes, but today I am thinking about that curious quality that arises for me where it seems impossible to imagine how I could be happy if I were to deliberately set aside having things as I would like them. To deliberately set aside the impulse to control and shape what we surround ourselves with, to control and shape what we get, may seem inconceivable, but it is oddly liberating.

Today, in my mind, I was grumbling and frustrated by something that wasn’t going my way. It was a small thing, of little consequence (although in my frustration and complaint, it took on a greater dimension than I think it really had) and in the middle of it, I thought to myself “are you going to hold on to this mild snit and make everybody else all uncomfortable?” In that moment, I saw that I could let it go and accept the situation as it was, so I did: it turned out to be a kindness for myself and those that I was with. In this small way, letting go of how I wanted things led to a bit of happiness; interesting.

Of course we must make all kinds of small and large choices in our day to day lives and these are informed by what we want and what we think is best, and there are many different factors that we bring to those choices. We may be able to lighten our burden, we might find some small relief, in allowing the possibility that things can turn out ok, even if they don’t conform to how we want them.