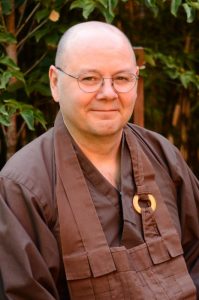 Our current prior (the chief priest and senior teacher of the temple) is Rev. Leon Kackman. Rev. Leon has been practicing with the OBC since 1983. He first started as a lay practitioner at the Portland branch of the then Oregon Zen Priory and then helped to start the Portland Buddhist Priory in 1987. In 1993, Rev. Leon moved to Shasta Abbey in Northern California to become a monk and, with the support of Rev. Master Jiyu-Kennett, was ordained by Rev. Eko Little in the spring of 1994.

Rev. Leon received the Dharma Transmission in 2001 and was certified as a Teacher of Buddhism in 2004. In 2019, Rev. Leon was named a master of the OBC by Rev. Master Haryo Young, the head of the Order of Buddhist Contemplatives.

Rev. Leon is presently the chaplain in North America for the OBC’s lay ministers.