(Follow this link to see the April 2020 Priory Newsletter where this was originally published.) 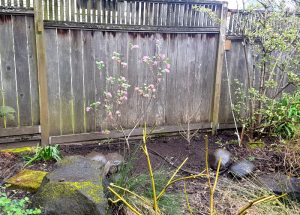 We got around to planting some natives (a currant with pink flowers and a still sleepy service berry to the right) offered to the temple late last year.

Before I dive into the matter of transferring merit, I have a confession to make: I don’t seem to be able to escape the feeling, sense, or experience that there is a Greater Thing that embraces and permeates all of existence and non-existence. This Greater Thing even embraces my minuscule little self and yours.

I really do not have any accurate idea what this thing is and I don’t have any proof, in a scientific or logical sense, that it is there. But, it is there.

I can say that my sense of it is not belief (like believing in a set of doctrines or ideas) and it is not knowledge (in the usual sense of knowing a fact or a concept); it has more to do with a bone deep experience. Maybe it is another kind of knowing? I am a lot less bothered these days by not having any idea what this Thing is and I recognize that it seems to be beyond and contain the idea making process. Paradoxically, we come to “know” this greater thing by accepting the limitations of our intellectual mind and being willing to sit quietly in the darkness of not knowing. Allowing myself to “know” in this other kind of way, helps me to be okay with not knowing it (or not knowing anything) in the usual way.

To simplify matters, I usually refer to this Greater Thing as the Buddha or Buddha Nature, although it could have other names.

There is a scene in the classic Chinese novel “Journey To The West” that illustrates my sense of this Greater Thing nicely. The novel is about a Buddhist monk who decides to make the difficult journey from China to India to collect and bring back the Dharma for the benefit of the Chinese people. On his journey, he meets and brings along three friends, Monkey, who represents the discriminatory mind, Pigsy, who represents the appetites and Sandy, who represents aggression. Although very helpful, Monkey is also prone to mischief and often gets into trouble – just like our own discriminatory mind, eh? (Actually, the story is mostly about Monkey and starts with him although Sandy and Pigsy play a part.)

Anyway, at one point Monkey has made some mischief and the Amida Buddha is asked to step in to help. Monkey says he doesn’t have to pay attention to what the Buddha says. To prove he is more powerful than the Buddha, and can get away from him, he jumps across the universe. When Monkey lands, he finds himself in a place where there are five pillars and decides to pee at the base of one of the pillars. All satisfied and impressed with himself, he jumps back to where the Buddha is and says something like, “see, I can get away from you!” But the Buddha holds out his hand and shows Monkey the pee on his hand: Monkey had peed on one of the Buddha’s fingers, thinking it was a pillar.

Although it is my experience that the Greater Thing exists (and embraces us even though we might pee on it or doubt it), I do not want to say what should or shouldn’t be another person’s experience: it seems like you can practice Buddhism without believing in or having a view that this Greater Thing exists (although it is what the Buddha taught). It is more that I bring it up to let you know of my perspective when talking about merit.

It is understood, in Buddhism, that doing practice generates merit or good consequences. We can prove and see this on a practical level just by doing a little bit of meditation or acting on the impulse to compassion or toward morality and seeing the effects. Also, though, beyond the level of our concrete day to day experience, it is understood that the doing of practice also creates an ineffable and usually unseen benefit. When, in a ceremony or at other times, we offer the merit of our actions to others, it is on this ineffable level that the “transfer of merit” happens. It is said that the Buddha spent an hour early every morning permeating the world with thoughts of loving-kindness: he spent an hour every day offering merit for all beings. (Of course he also spent most of the rest of his day teaching and helping others in other ways as well.)

Again, like many things on this spiritual level, I don’t really know what is happening when we offer merit. There is a story which illustrates some interesting aspects of the process and informs how I think of it though. This is a story that I heard second or third hand and I have no way of knowing, in the usual sense of knowing, if it actually happened in the way described or if the events of the story really mean what I think they mean: but the story appears to me to be true. Also, I apologize to the person it happened to if I have misrepresented it in some way.

One day, a friend of Shasta Abbey was traveling on Interstate 5 near Sacramento and was in a serious car accident. This was the sort of accident where they had to bring in the jaws of life to cut open the car to get the person out. The accident backed up traffic for some distance up the freeway and while the emergency workers were laboring to open up the car, the person in the car, in much physical distress, had an out-of-body experience. From this out-of-body perspective, they noticed one person in a car stopped up the road waiting for the traffic to clear, praying for them. The prayer was going up into the sky as a small beam of light and then, coming down from the sky was a flood of light that was sustaining the person’s damaged body in the wreck.

Again, do I know if this actually happened in the sense of can I prove it? No.

On the other hand, I do not doubt it. Letting go of the need to “know” in the usual sense, allows me to approach all this from a different perspective. To me, not being able to prove it means I can’t control it; I don’t own it. Because I can’t control it, it can become a matter of faith. This faith does not rely on a concept or idea and it does not have a problem with the facts of life, whatever they might turn out to be. Because I have seen that it is beyond the ability to prove, I have given up the need to try. This faith does not have an argument with the facts of life because it does not rely on a conception of how life or existence is or should be, it relies, instead, on the Greater Thing itself.

Because I don’t feel a need to prove it, and because I don’t doubt it, I don’t hesitate to offer merit. I offer it in the spirit of making an offering to that Greater Thing, the Buddha, and letting the Buddha distribute it in the way that seems best to the Greater Thing. Like that little stream of light going up and coming back as a big beam. Maybe the story could have turned out differently and that beam would come back in some way to help that distressed being to make a hard transition and not live. I don’t know; whether it is ultimately good for some person to live or die is too big a question for me (although I am sure grateful for the efforts of those emergency workers, and others like them, for their commitment to try to preserve life). Because “how it should turn out” it is too big a question for me, usually, when I offer merit, it is not in hopes of a particular outcome, but more in faith that some help will be offered to assist in whatever way is good. For myself, I try to keep in mind the principle that “no” is as good an answer as “yes,” even though I might like “yes” a lot better than “no.”

Doing the work to preserve life, if we can, makes its own merit; it is a good thing. The Buddha taught that one of the best ways to make merit is to nurse others. There are many ways to make merit and, in a sense we enhance that merit by turning around and giving it away, giving it back to the Buddha to be used to benefit beings. (Practically speaking, we can do a good thing and dedicate the merit of the doing to the benefit of some specific other or others in general.) By giving away our merit, by doing the practice of offering merit, we work toward opening ourselves up to be like a pipeline of merit to benefit beings. Merit comes to us from the Buddha and we let it pass through us back to the Buddha.

We don’t have to “know” how this works and there is a great deal of merit (and, as a side benefit, a lot less internal strife) if we can allow ourselves to quietly sit in the darkened place of not-knowing and offer our merit back to the Buddha for the benefit of beings.