(Follow this link to see the July 2021 Priory Newsletter where this was originally published.) 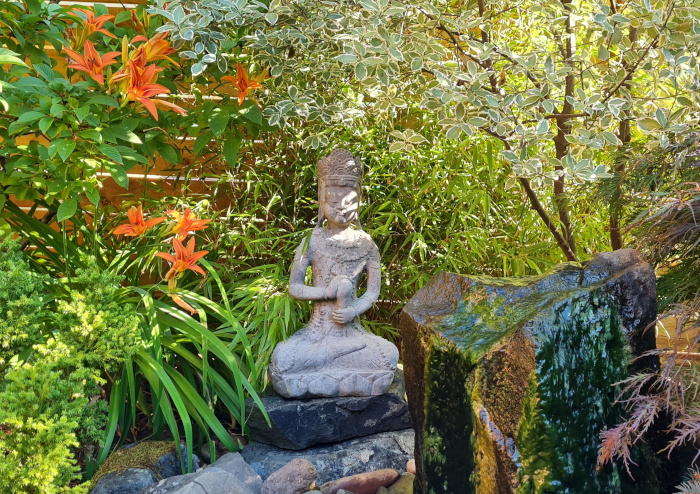 The other day, I happened to watch a comedy sketch in a YouTube video that had some pointed things to say about the intoxicating quality of anger.. While I don’t want to suggest that this video is exactly Dharma, there seems to be a lot of wisdom in its central point and it made me reflect in a new way about an incident (and therefore a pattern of my own behavior) that came up a while ago in a temple where I lived.

I was working on a project with a Dharma friend and, in an unguarded moment, I happened to wander into the area where the friend was continuing to work on the project alone. For some reason my presence seemed to have sparked a feeling of vexation in that friend and they reacted to me in a way that felt to me like I was being attacked. Seeing that things were not going well, I made gassho and bowed and walked away. Unfortunately though, for some reason their response left me feeling hurt and it touched a nerve that stimulated an old pattern of defensive anger. I know from past experience that once this pattern of defensive anger, based on either a perceived or an actual grievance, sets in, it can be very difficult let go of. This pattern can be difficult to let go of and I can find myself saying and doing harmful things, seemingly justified by the harm which, in my perception, has been inflicted on me.

In this particular case, as a matter of practice and because I didn’t want to cause further harm, I made every effort to bring this problem to my practice. Because of past work on this sort of thing, I could see that, while the event really did happen, my response to it was and is my own: the anger that I was generating was my own thing to deal with. Understanding that the angry response was my own, and not wanting to inflict that anger on the other person, I tried to avoid spending time with them in a context where I would need to communicate with them (we still would see each other in the meditation hall, but there usually isn’t a specific need for much communication there) and at one point, I apologized and let them know that I was angry and I didn’t want to cause further harm while I worked through that anger and so was going to bow out of a planned event.

Again from past experience, I recognize that this avoidance can usually only be helpful as a temporary measure to help let the anger subside. (Although, realistically, there may be situations – like in situations where there is repeated and intractable harm being created – where it might be long-term temporary).

Mostly though, and first, I tried my best to be still with and accept the feelings of body and mind associated with this event and I worked on letting them arise and pass away. This meant that I spent a number of sleepless hours on several nights, trying to rein in my mind’s tendency to gallop off into replaying the grievance and various responses I could make.

In addition to bringing this to my meditation, and working on letting it arise and pass away as I went through my day, I took some time to talk with some of my seniors in the Dharma. This talking with my seniors and teachers helped to give me some perspective and encouraged me to look more deeply at my assumptions about the situation; although some of what was said to me was difficult to hear, and didn’t necessarily validate or encourage me, I found it to be very helpful. In the sometimes paradoxical way of practice, talking with my seniors, who I trust to be making every effort to speak and act from Truth, I found those conversations deeply encouraging toward my own effort to live from Truth. (This “living from truth” is, I have found, the best means of bringing myself to peace and is the place where I can most skillfully and helpfully act in the world, when it is necessary for me to act.)

During this period, I also took some time to look into the written Dharma and specifically what is written about the precepts. In my upset with the other person and my rehearsing why they were wrong and why they should be held accountable, I remembered a line common to the precepts as they are expressed in the “Scripture of Brahma’s Net” and I wanted to check it out for the purpose of finding ammunition to use against that person. While I am ashamed to admit to this unworthy motivation for seeking out the Dharma, in the end, I didn’t use the line for that purpose, and instead, I found some teaching which illuminated my own preceptual mistakes – even our less worthy motivations can be turned toward the good when it comes to the Dharma practice.

The thing that I found that was illuminative was in the title of the 9th precept: “On feeding anger and hardheartedness.” We can work on this precept about training our anger to such an extent that we can – and for me, I find that I need to – even let go of the more subtle position of hardheartedness; in this case I certainly needed, for my own practice, even setting aside some potential benefit for others, to let go of that hardheartedness. I am happy to say that eventually that Dharma friend and I worked through that event to a more peaceful place.

The thing that the YouTube video had me reflecting on, was how easy it is to get into a mind where we think we have a righteous reason for being angry in our efforts to protect ourselves from some real or imagined harm; we convince ourselves that the angry position is correct and justified. Apart from the often harsh harm we do in an outward way out of our anger, we also create a real harm for ourselves in the cultivating and shoring up the state of hardheartedness. This hardheartedness keeps us from releasing our anger and allowing the deeper hurt to arise so that it can be seen and allowed to heal. This state of affairs where we do not allow the suffering within us to arise and be helped, just ensures that the cycle of suffering continues. It is like we have a piece of grit or a splinter in us that we feel we need to defend or protect and our efforts to defend or protect it are unskillful and instead just result in pushing the grit or splinter deeper.

It is my hope and intention that I will be able to make the coming hot and dry months (out west here, we refer to this as the fire season)  a time for increased effort to see and practice more deeply with these grievances and hurts so that they do not turn into a full-on fire and instead are able to be brought to peace.

Here is a sort of preemptive verse I might recite to myself when entering tough and potentially angry times or situations:

A Verse of Loving-kindness:

May whatever they have gained not be lost.
All beings are the owners of their own Karma.

(I will take up Bodhidharma’s “Outline of Practice” again in the September newsletter: we won’t have a Dharma article in next month’s newsletter.)