(Follow this link to see the December 2020 Priory Newsletter where this was published.)
​​ 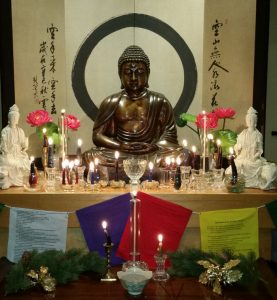 This Article was originally published in the October 2020 Lions Gate Buddhist Priory Newsletter and is part of a series available on the Lions Gate Priory website. Also, the original Dharma talks are available as well (How to Meditate 1-7).

The following text is a transcription of the seventh and final part in a series of Dharma Talks offered by Rev. Master Koten to the community of Lions Gate Buddhist Priory in 2016. It was transcribed and edited by Tracy Kitagawa, Michele Feist, Pierre Kohl and Rev. Master Aurelian with minor revisions made for ease of reading.

Buddhism teaches that emptiness is simply empty of anything our minds can grasp and that this emptiness is the actual true nature of everything.

There is an old Japanese story of the Buddha trying to help somebody who was down in the deepest variety of, for lack of a better word we’ll call hell, but in Buddhism it doesn’t mean an eternal state. The Buddha saw this person suffering horribly in the very darkest pit and wanted to help. Because this is the way karma works, he tried to find a kind deed, an unselfish act that this person had done. All the Buddha was able to find was that one day this person, who was a robber and a brigand, on returning home from having stolen and killed a lot of people, saw a spider in his path. The robber was about to stamp on this spider but refrained from doing so.

As a result of this kind deed a spider appeared in this hell realm, at the bottom of a very dark, dark hole. The spider spun a web, leaving a thread to dangle down, down, down, down, into the hole. And when the thief, for the lack of a better term, saw the spider web, he saw it as a way out. So, he grabbed hold of the thread and began to climb. Bear in mind that the appearance of this spider web was a result of his creating good karma. The thief climbed up the spider’s thread higher and higher.  As he travelled further up he could see there was light up above. Then he looked down and saw that all the other beings who were there in the pit with him were watching what he was doing, and had begun to follow him up the spider thread. In great fear that the thread would break, the thief turned and shouted at them, “Get away, this is mine!” and at the very word “mine” the spider thread snapped. The thread of his merit and karma could bear the weight of all beings but not the weight of his selfishness.

People often think that it is greed and selfishness that are the reality and that when people talk about compassion and kindness, they are being unrealistic. Bleeding hearts is sometimes the term used to refer to those who express, what seem to some, an unrealistic concern for other beings. What people don’t realize is that it is compassion and unselfishness that are real. It is greed, hate and delusion that, from the viewpoint of the Unborn, are unreal.

Challenging karma is exemplified in a story of two First Nations who once were at war with one another in this area of British Columbia, long before contact with Europeans. One of the First Nations chiefs, named Splintlum, had a bridge named after him in the village of Lytton for his many deeds, including the following remarkable accomplishment. Over time Chief Splintlum and his Lytton group had captured people from Mount Currie, people known as the Lillooet. The chief decided to end the conflict, so he travelled through his territory and beyond and purchased all the slaves belonging to the Lillooet nation. He then took them back to the traditional area of dispute between the people of Lytton and the people of Mount Currie – the Stein Valley, where battles used to take place. Chief Splintlum entered the Stein and crossed through it until he encountered the Lillooet people on the other side. He then released their people to them, those who had been slaves to the Lytton people. They sat down and camped there together and made a formal peace, which continues to this day. This peace is commemorated at the entrance of the Stein Valley.
This is what is known as challenging karma. In the precepts commentary it says, “to do something by oneself without copying others is to become an example to the world.”

In Buddhism, emptiness is a term used to mean that the nature of reality is, as Zazen Rules says, beyond personal opinions, beyond our grasping with the selfish mind.

Nagyaarajyuna says that the nature of this emptiness is compassion. The essential nature of emptiness is compassion. When people try to grasp the nature of reality or the nature of spiritual states with the selfish mind, they will not only not understand, but they will experience instead a sort of negative emptiness as a result. And people can end up feeling frustrated because they will seek what Chögyam Trungpa calls “spiritual materialism.” That is, they attempt to practice spiritual training for the sake of self-aggrandizement. They become like the hermit crab, who gathers up all sorts of shells belonging to other beings who have passed away, and decorates himself with them and hides inside of his accumulations. This is very much what people do.

This is because selfishness seems stable: because it’s what we know, we are fearful of letting go, even for a moment. But compassion is the actual true nature of things. When we sit in meditation and let go, what is ​it​ that is there? The grasping mind cannot find anything there and therefore thinks that there is nothing there.

In the same way, when people reject the more primitive ideas of God they think that there is nothing there. And yet this nothing is filled with compassion. Because this is so, when we hear of a spontaneous act of kindness, or an act of courage, or when we hear of somebody acting unselfishly for the sake of others, we experience a lifting up of the heart. It is why societies give medals or rewards for such things. It is because these acts of compassion come very close to the Truth.

Compassion in meditation is of such importance that countless verses talk about it. The day in a monastery starts off with the recitation of Avalokiteshvara, the Great Compassionate One. In the middle of the Scripture of Great Wisdom​, which is also recited every day, the Holy Lord Great Kanzeon Bosatsu is mentioned, and at the end of the day during Vespers, the ​Litany of the Great Compassionate One​ is recited. In the Theravada tradition there is the ​Metta Sutra​, the Sutra of Loving Kindness, which is equally emphasized.

To train, letting go of selfishness, is the most important part of the meaning of training and meditation.

We are very much like the mayflies that I described in the previous section.

“What weeds by the roadside will the dew of our life fall on?” The dew falls on the weeds by the roadside and evaporates in the morning sun and is gone. This is not simply to remind us that all is impermanent so we had better get a move on. It’s much, much more than that. We can be convinced of impermanence but not necessarily get a move on to do good things. We also need to be reminded of the opportunity that we have, as human beings, to train ourselves.

Sometimes benefiting others is not the same thing as staying around them. Sometimes leaving the other person space is compassion.

There is something called the Bodhisattva Vows in Buddhism. Although they are repeated a lot in ceremonies, “However innumerable beings may be I vow to save them all…” or “We offer the merits of this ceremony to all so that they may be able to realize the truth…” etc., I think of the Bodhisattva Vow as a commitment to go where the training will take me and to not set any limits upon that. I vow to go to where the path of training takes me. That is how I have ended up here on Dragon Flower Mountain. It was not a career choice but rather a trying to determine what was good to do. If I were to expend energy determining what I would like to do or what I would prefer to do, I might have done something quite different.

To make such a commitment, to go where the training takes one, is the reason why some people become monks – so that there is nothing that they are not putting into the pot, if I can put it that way. Monastic training is not superior or inferior to life as lay trainees. The comparison makes no sense. People who become monks are people who cannot be satisfied with ordinary answers or a stopping place, and when that is so one has to keep on going. If one is not troubled by such things don’t worry about it. That’s quite useless. It’s more a question of being true to where the path takes you, rather than having a particular definition as to where it should take you.

It is foolish to think that all people are meant to be monks. For one thing this simply wouldn’t work. It doesn’t make any sense. Therefore, lay people worrying about whether or not they should become monks is, to my mind, not useful at all. If you feel a pull that you cannot resist however, that is a different matter. If you don’t feel the pull don’t be concerned. There is nothing lacking. As I have said before, there have always been laity who trained themselves and attained the way.

Compassion is, as it were, always co-joined with True Wisdom and both are necessary and essential for understanding the Buddhist path. One could say, therefore, that Wisdom is Emptiness; Compassion is Fullness.