(To view the June 2018 newsletter where this was first published click here.)

An illuminating question we could ask ourselves is what motivates us? There is the sort of motivation that comes from outside ourselves – the wish to have some good attribute like world peace, a clean environment, a comfortable amount of money – and these are worthy of consideration. What I am really interested in, though, is looking at what actually gets me to do what I do, good or bad, throughout the day.

Of course, classically, the Buddha taught that if we act on – are motivated by – greed, hatred or delusion, the three poisons, suffering will increase; conversely, if we act on – are motivated by – compassion, love or wisdom, things will generally turn out better in the long run. But we don’t always act wisely even when we recognize that such an action will not have a good outcome: why is that?

As an example, lately, I have been working on better adapting to my changing metabolism as I age (that is a fancy way of saying I can’t eat as much as I used to and I am paying for eating too much in various ways). As I was looking at the problem with my doctor, he suggested some further modifications to my diet which would make it even stranger than it already is. Both because I like food and have worked for years in kitchens, and because I have struggled to manage my various food intolerances, I have made a bit of a study (without being too obsessive about it, I hope) of what constitutes a good diet and I am fairly confident that my basic diet is pretty reasonable. It was pretty frustrating to hear suggestions that would make my diet even difficult.

Because it is my habit to first take whatever problems I have to my meditation practice, before making any changes to my diet I decided that I would sit with the questions and frustration that this brought up. There are two basic aspects to what I mean by “sitting with” a problem like this. One aspect I talk a lot about and that is the effort to sit still in the midst of the thoughts and feelings that arise within and outside of me: to allow these things to just arise and pass away without grasping after them or pushing them away.

In this case, the doctor’s tests indicated that there were some blood chemistry issues that it would be good to address and I had no reason doubt or question either the information or the sense that it would be good to take some action. It was just that the steps the doctor suggested didn’t seem like they would work for me. (He also understands that as a monk who lives on alms, I am limited in my ability to responsibly follow an extreme diet). As I considered this problem, I had the hunch that what would really help me would be to just eat less. Eat basically what I am eating, just less of it. This approach had a resonance within me, was in accord with what my informal study of diet indicated as positive, and had the benefit of also being in accord with a bit of advice that great master Keizan and others have given: Keizan said three fifths of what a person eats feeds the person and two fifths feeds their doctor. I have no opinion about whether that is true for anyone but myself, but it was enough to encourage me to try it out.

So, I changed the quantity of food I prepared and ate and continued to make the effort to sit still in the midst of the feelings and thoughts that arose around food. Now I should say that for a very long time I have been using this approach of sitting with an issue in combination with learning what I can about the external aspects of the problem in dealing with my suffering in general and to health issues in particular. At this point, I don’t have any expectation that practice is going to take away any of my problems. Or, in asking for the Buddha to help me, I do not expect that my problems will magically go away, it is more that in approaching whatever problem I encounter, I have proven it true for myself that if I can apply practice to a problem, it helps me, and it usually helps me a great deal.

As I struggled to eat less and to be still in that struggle, I realized that I had unwittingly been motivated by an old association, I think formed in my interactions with my grandmother who, as an expression of love, took great care in feeding us. The impulse to eat to much, for me, was a bit bound 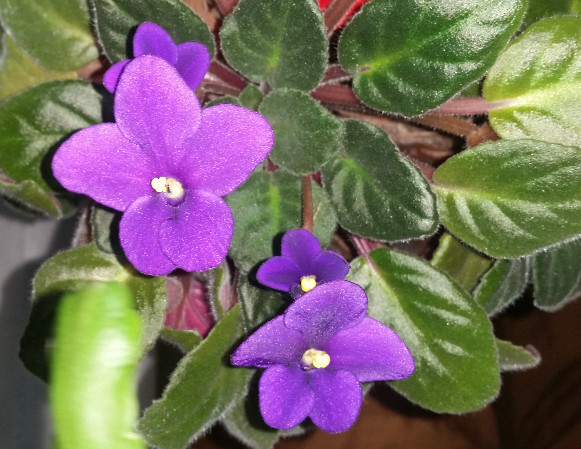 up in trying to reproduce that feeling of love. When I could see that, I could, with kindness and compassion, let it go. It then became a bit easier to keep to my discipline of eating less. After eating less for awhile, my blood chemistry is better and my doctor is happy with the results.

(When the temple African violet blooms, as it is doing just now, it always reminds me of my grandmother who kept them in her apartment after she moved from the farm to town.)

As I say, I have been steadily working on bringing my troubles to practice and I am confident that this helps me. This process doesn’t always produce some discrete insight into my behavior or mind. Most of the time though it helps me to clarify a direction for me to head in and helps me to see more clearly those aspects of myself that I have learned don’t lead in helpful directions.

Beyond the somewhat prosaic way that this aspect of turning toward the Buddha helps us, steadily letting go in these sometimes small ways helps to strengthen our ability to let our lives be guided by the Buddha Nature within us. Ultimately this leads us to the deeper turning about which is awakening.