(Follow this link to see the January 2019 Priory Newsletter where this was originally published.) 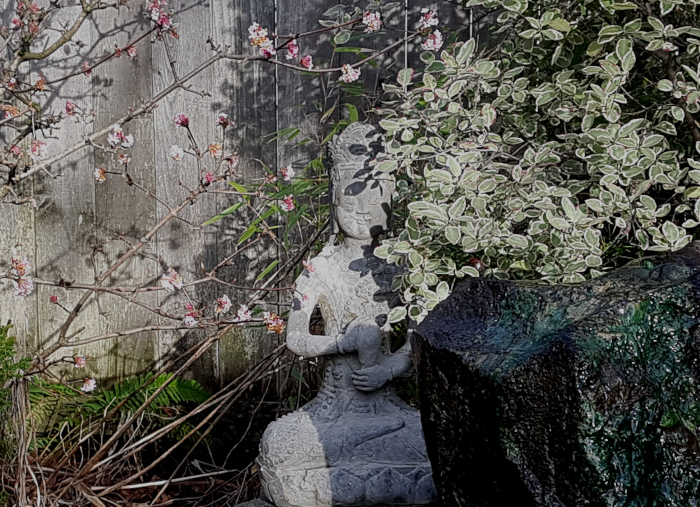 The dictionary says the word refuge means some variation on 1: shelter or protection from danger or distress; 2: a place that provides shelter or protection; 3: something to which one has recourse in difficulty. As I think we all know, the world has many dangerous, confusing and treacherous aspects and it is often hard to determine what actually produces lasting positive outcomes. Sometimes it seems a bit improbable to me, but, generations of people have found that practicing what the the Buddha taught has been a literal – a sort of dictionary definition of – taking refuge. (And this applies to those who, without necessarily thinking of it in Buddhist terms, take refuge in one way or another, in that which is Fundamental.)

In our precepts ceremony, the Three Refuges are considered to be the first three precepts and in all forms of Buddhism, the ceremonial for becoming a Buddhist involves, primarily, taking refuge in the Three Treasures, The Triple Gem or the Three Refuges (all names for the same thing).

For myself, I have taken refuge in the Three Treasures many times in my life: at formal precepts taking ceremonies; the recitation of the kesa verse each morning when I put on my kesa*; and informally throughout the day when I get distracted or face difficulty and I want to call myself back to where my basic refuge is. Each time, I try to incorporate the intention to allow that taking refuge to help me to connect and give expression to the deepest part of myself, to connect that which is Fundamental as it appears in me.

The idea of taking refuge, you know, gaining shelter or protection from danger or distress, sounds pretty good but when we dig into it, it can be difficult. Sometimes our intention to take refuge in the Three Treasures can confront us with some treasured habit that, according to the Dharma (and maybe even our own experience, if we will admit it), is actually causing us distress or danger. In other words, we are actually – and maybe unwittingly – taking refuge in something that is actually harming us or the world or beings around us.

Some of the obvious things we might take refuge in that seem to help, at least initially, but really don’t help in the long run, are taking recreational drugs and alcohol; the pursuit of and the possession of material wealth including money; social status in its various forms including fame; and the pursuit of and holding onto powerful positions. And there is an almost endless list of subtler things we can take refuge in that do not help us, or the beings and world around us. Some of my personal “favorites” are the arguing mind; the pleasure of external affirmation; the sensual pleasure of food; the stance of being inadequate; the stance of being right. You will notice that at least one of the things on my list is not pleasant, but it can be true that we can take refuge in a negative when we are afraid of the consequence of indulging in the things opposite to the negative. (Somewhere along the stream of my life the decision was made that it is better to err on the side of believing I am inadequate rather than believing I am somehow a superior being.)

Some of the things we try to take refuge in that turn out to be unsatisfactory don’t work as a refuge, not because they are unhealthy or somehow bad, but because they are simply impermanent. We might take refuge in our good health or a youthful appearance; these things are not bad, they just don’t last. Or, from my list, it is useful to pay attention to those around me and what they think of what I am doing, but if I anchor my sense of well-being in what others think of me, then, when I need to do something that is unpopular, it will have added difficulty.

Something happened the other day that had the implication that someone important to me might undermine a project I am working on and a mild sense of upset and disorientation arose in me. As I looked at it, sat with it, felt it, I  recited the Three Refuges. This helped restore my sense of steady balance. Really, the person involved is a free agent and my well-being is not dependent on him – it would be an undue and unfair burden to him for me to be dependent on him. Of course, if the thing I was worried about comes to pass, I will have to take steps to deal with it (and it would be unpleasant for all the usual human reasons) but placing my sense of refuge in the Three Treasures relieves the existential worry and fear.

It is these fears and worries and upsets that arise in the course of my day to day life that can be a clue to when I am inadvertently taking refuge in a way that is unhelpful.

It has been my experience that taking refuge in the Three Treasures just makes me feel more regular and normal: I don’t like being right or eating food that I like any less, I just get fooled less by the feeling that they will somehow solve my basic angst and worry. And I still need to take care of money matters in a responsible way and guard my reputation and all that.

Practice is a path; it is a path that starts right where we are, right now. We may be able to imagine what a future position on the path might look like, but, in order to get to that position, we have to be willing to be right where we are right now. We have to be willing deal with what is right in front of us right hear and now. And, this is good news. The tiny step we take today, letting go of some small thing, taking refuge in the Three Treasures, in the fundamental thing in a small way, is helping to prepare us for that big thing down the road that we might be worried about or don’t even see yet.

* A kesa is the robe of Buddhist monastic worn usually over the left shoulder and covering the other robes. The kesa symbolizes the commitment to the precepts and to the practice. The small kesa, or rakhusu and the wagesa are abbreviated forms of the kesa worn around the neck and can be worn by lay people who have taken the precepts formally.