(Follow this link to see the December 2019 Priory Newsletter where this was originally published.) 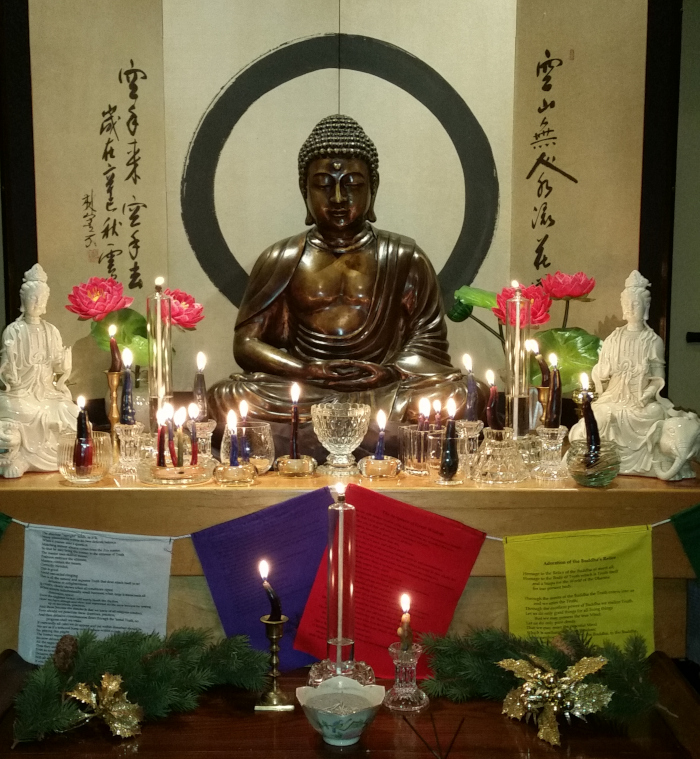 One of my esteemed teachers, Rev. Master Koten of the Lion’s Gate Priory in British Columbia, once shared an image of practice: practice (or maybe he said life, I can’t remember his exact words so maybe it is best to think of it as “life with practice”) is like getting onto a train platform with all your baggage and realizing that the train you want to catch is leaving the station. You try to run along to catch the train with your mountain of bags and you realize that you have a choice, you can either stay on the platform with all the baggage or you can let it go and get onto the departing train.

Although the “baggage” can be anything that we hold onto from the past, today I am thinking of all those hurts and grievances that we accumulate about our friends and family and co-workers: all those people we come in contact with who have been or are important to us in our lives. When we hold onto some slight or grievance, we are insuring at least two hurts for ourselves, the original barb and the hurt we get for repeating the thing in our mind. Each time we repeat the thing in our minds, we can get a new hurt or, seen another way, we reinforce the tie we are making to the original hurt.

Depending on the nature of the hurt it can be very difficult to let a thing go, but if we do not make the effort to let go (and I am talking about “letting go”, not pushing the thing away) a hurt can just hang around causing a nuisance for an untold amount of time. When I talk about letting go of this kind of baggage, I am talking about letting go of the mind’s habit of rehearsing a hurt; or rehearsing how the hurt could have been different; or rehearsing how the person who did the hurtful thing could have handled it differently at the time of the hurt; or could handle it differently now; or rehearsing how other people could have handled the thing differently either now or in the past. In talking about letting go of something like this, I am not suggesting that the hurt was right or that the we are wrong in feeling the hurt or that we should think that other people treating us badly is somehow ok.

What I am saying is that letting go of a hurt in our own mind can be the first step in allowing ourselves to heal and can open up a clarity of mind to take constructive steps to deal with the external situation. The Buddha suggested that if we are shot by an arrow we should not get sidetracked into asking who shot the arrow or what their intent was or anything like that, instead, we should just get on with pulling the arrow out. Pulling the arrow out is letting go of the hurt. This kind of letting go is one aspect of what is going on in the Christian practice of forgiveness.

We normally think the we would like to feel connected to the beings around us and it is profoundly true that we are already connected to the world, whether we are aware of it or not. When we take in a hurt and hold onto it by chasing it around in our minds, we are establishing an extra connection to another person, we are establishing a tie that binds us in a way that increases suffering rather than soothes and supports us in the way that our basic connection to What Is does. The letting go that I am talking about, the radical forgiveness of the Christians, is a way of severing that tie. This severing is a positive and powerful thing in that it allows us to focus on what we can most directly influence: our own mind. With this severing we are no longer dependent on someone or something external to us so resolve our suffering; our suffering then is just a matter for us and Buddha Nature.

When we let go of a hurt or any baggage from the pas,t it is an act of faith in our inherent connection to the Fundamental Life; it is an expression of that connection.

Again, letting go in this way does not stand against taking any particular external steps. Sometimes, in working with this, after determining to let go of a hurt, I have decided that it is not good for me to associate with another person but sometimes it has seemed good to carry on, maybe a little wiser if not also sadder. What action we will need to take becomes a matter of our wise discernment which can be more easily seen for the letting go.

As I write this, I am reminded that I once had a very difficult time with this sort of thing and I realize that I really have found that by diligently working on letting go of baggage in this way, I have somehow become more nimble in letting the harshness that comes my way slide past me. In a way, I have learned to not take it in as easily.